Total tourism: Skiing, heritage and beach in one day!

Want to go skiing, enjoy a top tourist destination and go to the beach for a swim all in one day but don’t have a private jet? Well, Granada is the place to go.

Mario is an Italian boy who is spending his year abroad studying in Granada, in the South of Spain. His friend Luca has come for a weekend trip so Mario has planned a busy day for them both. The challenge is huge: to go to the mountains, the city and the beach in the same day.

The two friends got up very early in the morning and after only 40 minutes driving they arrived at Sierra Nevada, a ski resort located in a National park with the same name. It’s late April so the tickets were cheap and it was less crowded than usual. That’s the advantage of the low season, but the snow was melting quickly so they planned to go to the city of Granada to have lunch.

Back in the city, Mario took his friend to the old town. Luca was really impressed with the bustling streets, the fusion of classical and ancient architecture and the really good atmosphere. Luca explained to him that what he loves most is that the city hasn’t lost any of its culture or charm. He added some historical facts about how the Moorish occupation provided a great heritage to the city. The most significant monument is the Alhambra Palace, this is a fascinating historical spot with breathtaking views. Unfortunately Luca didn’t book the tickets one month in advance like he should have.

At around 3pm it was Spanish lunch time and the perfect time to enjoy the local gastronomy in one of the most enchanting quarters: The Albayzin. This area is on a hill opposite the Alhambra and nowadays it's an “open-air museum.” Its streets have lost none of their charming 18th century character. So after strolling for an hour working up an appetite it was time to have tapas, a really special Grenadian tradition that offers a free tapa* with all your drinks. The friends chose an incredible spot. A terrace near a viewpoint where you can spend hours gazing at the Alhambra just opposite. Luca was hooked on a brochure which announced a flamenco performance in a nearby cave. He was looking forward to learning all about the folklore of the region. Meanwhile Mario regretted that they had to leave soon so they didn’t have more time to go sightseeing and enjoy the local nightlife.

But there was no time to waste, they had a meeting with more Italian friends in Salobreña. This is a white house village built on a enormous rock by the coast with an ancient castle on the top. It is surrounded by beaches and has fascinating tropical plains. What gorgeous scenery! It was 6pm, the ideal time to swim in the Mediterranean sea.

Finally Sunday arrived and Luca’s flight took off from Malaga airport. In his baggage he kept a list of all the things he will need on his next trip to Granada: He will probably need an entire week, at least... 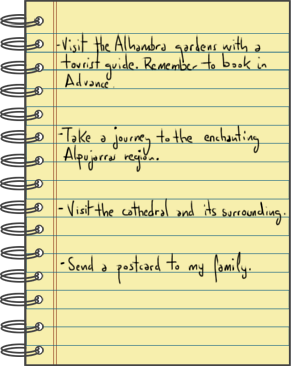